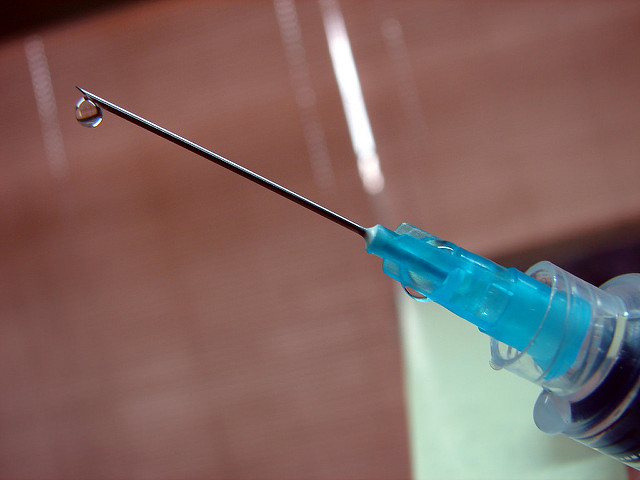 One of the most difficult things to do is to stick with your goals when all the other people around you are doing things which go against what you are trying to accomplish. For example, if you are trying to eat more vegetables, but those around you are eating granola bars and chips, it’s hard to wolf down that carrot. It’s a matter of will-power. And like a boulder being constantly beat upon by the surf, or solid granite riverbed, it will eventually be worn away through time and constant pressure. There is, however, you can avoid bing word down and instead make progress in your goal and, possibly, enlist the aid of those around you.

The way to help you resist temptations as they arise is to “inoculate yourself.” But what, exactly, does this mean?

When we try and get ahead of a disease or a sickness like the flu, we will inject a person with mostly dead strains of the sickness. Our body then builds up anti-bodies to fight this foreign invader. We call this “getting a shot” or “inoculation.” The idea is that we will gain an immunity to the disease or particular strain of the flu. We can do the same with situations we may find ourselves in when trying to start a new habit or reach a troublesome goal.

When first setting the goal, one way to help inoculate ourselves is to visualize the situations we believe we may encounter. Imagine them in detail. The smells, the sounds around and the feelings you will experience as you are assailed by the temptation. For example, if we use the example from above, we can visualize our friends eating donuts. Picture the frosting and the smell of the freshly baked donut. You will be tempted. Imagine how that feels. Can you see what it looks like when one of your friends holds the box in front of you, and the smell wafts up to you? The more details the better.

Then, picture yourself declining. See how it feels. What do you say? How does it look? What if they pressure you? How do you respond in a graceful manner while still holding onto your goal? Picture what that goal is. Maybe it’s 15% body fat. Maybe it’s fitting into some nice clothes. Visualize yourself as having achieved that goal, and think of yourself achieving that goal in just the moment when they offer it to you.

This is an inoculation.

By going through that exercise you have just built up some antibodies against that particular temptation. The more times you engage in this visualization exercise, the more “antibodies” you will build up, and the more strength and ‘will-power’ you will have in resisting those temptations.

Another way to inoculate yourself against temptations is to enlist the help of others. While this may sound simple, sometimes it can be a challenge.

For example, you may not want to share your goal publicly with others because you are embarrassed about the behavior you are trying to overcome. Maybe you have tried to overcome it before and you are afraid people will just blow you off, saying something like “oh, this again.”

And you may be right.

But there are people around you who would be willing to help you. There always are. Even if don’t recognize them for who they are. So, your first step is to identify a person or group of people who can help you. It could be a spouse, good friend, a parent, sibling, religious leader or co-worker. Somebody you know can keep a secret and is interested in helping you become better.

Your next step would be to talk to them about helping you in your goal. It doesn’t have to be something elaborate, but just share your goal and your reason for the goal. Ask them to help but also let them know you are just looking for their encouragement. You don’t want them to be overwhelmed with any major responsibility. In some cases you just want them to be somebody you can check in with. In other cases they be somebody who can speak up for you in a group if needed. The situations will vary.

Taking the example from above, let’s say you are working on reducing the amount of sugar you eat and mentioned it to one of the members of your team. When that donut comes around, if they sit right next to you, they can just begin reaching for the box before you even have your fingers on the box because they know what you are trying to accomplish.

Engaging those around you and your imagination, you can create barriers which can help you accomplish almost anything.

Having people around you to support you and “provide cover” when you need it as well as visualizing the problems you may encounter when trying to reach a goal can be immensely helpful and go a long way to giving you the ‘willpower’ you need to reach your goals.

Now go and try it out for the next few days and let me know in the comments below how it has worked for you. I’d love to hear how it worked and what challenges it helped you overcome.

‘Syringe 2 With Drops’ by ZaldyImg and can be found on flickr.