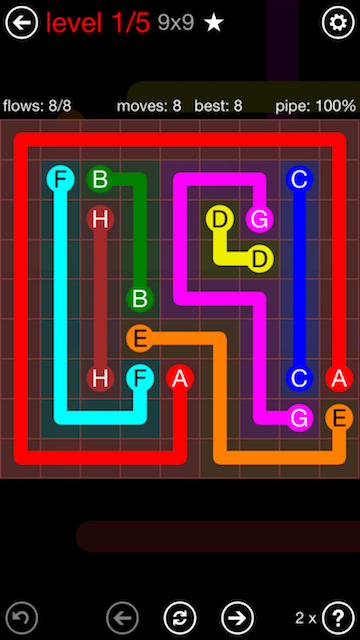 Flow Free is a game where the object is to connect four or more sets of colored dots on a grid without crossing each other. While the game sounds rather simplistic in its objective, sometimes the actual puzzles can be quite daunting. But as I’ve begun playing it I’ve learned some valuable lessons about business which I thought I would share. Some puzzles in the game are fairly easy to solve and you can tell at a glance what is needed in order to complete the problem. However, there are others which are much more difficult.

I’ve noticed that more often than not, if I try and just reason out the solution it takes a very long time and I’m not able to resolve the problem quickly. Instead, the best course of action is to just start. I look at the dots, and using a couple rules of thumb, I’m able to just start. As I progress I’m able to see more clearly how to solve the problem and eventually, when all the easy paths have been filled, the ones that would have been hard to solve on their own, are now just as easy the the easier ones were initially.

The same can be said for business.

If you find yourself just focusing on the entire problem trying to solve it all at once and see the big picture, you will not make any progress. Instead just focus on what you can do right now. What is the easiest, simplest thing that you know you can do? Do that.

Once that is done, then look and find the next easiest thing and do that one thing. Eventually you will have taken care of all the easy problems and the hardest nut to crack of all of them will have become that much easier because in the process of taking care of the easy ones, you have made it that much easier to take care of the big problem as well.

The image, titled “Flow”, was taken by “thedavidcmitchell” (that’s me!). You can find it on flickr.