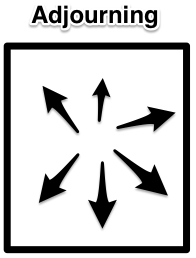 When discussing team development many people focus on getting people from the forming stage to the performing stage. There is, however, another stage people which fail to consider: the adjoining stage. Getting the work done is important, but if there is not a plan on how it will be perpetuated or how it will be handed off or closed down, then why do the work in the first place?

An important part of the planning stages for a project is considering how you will handle the close of the project. Is this a one-time thing? Will what you are working on be consumed by other people? Are you creating an initial result that somebody else will be responsible to maintain? If it is a one-time project how will you clean up after you are done? These are all important questions to ask even as you form the team. The answers to these questions can impact what work is done, how it is done and can help determine what roles people play even in the initial stages of the project.

As the work enters the final stages, you also need to consider the feelings of the team. The project may have been years in the making or just days. If it is more along the lines of years, then finding ways to acknowledge the effort that has gone into the project should be paramount. Is the team ready to be done with the project because it was such a slog or are they looking for ways to stay together? Attitudes on the team may differ, but looking for ways to help people deal with them is a great chance for you as a manager to create meaningful experiences.

You as a manager need to be aware that you may have already moved on, but that people on your team may not have. Create activities to help them acknowledge the endings, maybe even take mementos as a part of the ending. In one case when an airline was being purchased by another, the purchasing company provided a way for the employees of the old airline to obtain merchandise from the old airline as a way to acknowledge the contribution they had made while in the old company. Consider ways you can do the same.

As you do so, the team will be more willing to engage again on another project in the future and will feel a better sense of closure.